IPPUDO’s red and white bowls,and the origin of their porcelain

Let’s talk about the ramen bowls used to serve the ramen. IPPUDO uses two types of bowls: red and white. When you go into a typical IPPUDO ramen shop, you’ll see the bowls stacked in rows on the counter, but in some of the shops, the bowls form a central part of the décor, so their use isn’t simply functional. So this leads to the question of what role the bowls serve as far as IPPUDO is concerned. In actual fact, ceramics, the epitome of the traditional art of Japanese pottery making has a subtle but strong connection.

WORDS BY SHOTA KATO （OVER THE MOUNTAIN）

The bowl complements the taste of the ramen

Hello readers of IPPUDO OUTSIDE. My name is Shota Kato of the IPPUDO OUTSIDE Editorial Department. The question I’d like to ask all of our ramen-loving readers is how many of you actually love cooking. Personally I like to stand in my kitchen and cook, and the time I spend cooking is when I relax and re-energize. I’ve always been interested in crockery and dinnerware, and it’s probably because I’m passionate about creating food which is on a par with the beauty of the plates and dishes that I got so interested in cooking. There are probably others like me who developed an interest in cooking because of an initial interest in crockery. So today I’d like to talk about the IPPUDO bowls.

Of course, it goes without saying that in order for customers to rate the ramen in front of their eyes as delicious, IPPUDO needs to concentrate on the quality of the ramen, but IPPUDO also considers the bowl to be part of the overall experience which accentuates the taste.

If you’ve ever visited an IPPUDO ramen shop, you may have noticed that the IPPUDO bowls play a role as part of the interior display accentuating the space. Take for example, the familiar red and white bowls piled up on the counter. The white is for the Shiromaru Classic while the red is for the Akamaru Modern, and these two bowls are used specifically for the two IPPUDO signature dishes. It’s not all that unusual these days to designate bowls for specific items on the menu, but initially, when IPPUDO set out this was a novel approach in the ramen industry.

In fact, in some of the shops, you’ll see that the bowls add to the overall drama of the place. For example, the red and white bowls span out in a circle on top of circular shelves in the Shinjuku Island Tower shop while the bowls are skewered on a pole that connects the ceiling to the floor in the Ikspiari shop, and so the bowls aren’t simply used to serve the ramen, but are utilized as part of the interior design.

It was through writing this article that I found out that the red and white IPPUDO bowls are made from “aritayaki” （Arita porcelain） which, like IPPUDO, has its roots in Kyushu. As you may know, aritayaki is a form of porcelain which is the epitome of Japanese pottery. It came to be known as aritayaki as a generic term for porcelain fired in the vicinity of the town of Arita in Saga prefecture and is easily recognizable because of the white translucency of the porcelain and the delicate details in bright colors of indigo, red, yellow and gold. And it’s actually quite rare to have aritayaki which is composed of a single color like the IPPUDO bowls. What’s more, in the town of Arita which is where aritayaki is made, pottery and porcelain are embedded in the outer walls and roads of the town. It’s clear from this unique townscape that Arita is a town of pottery. 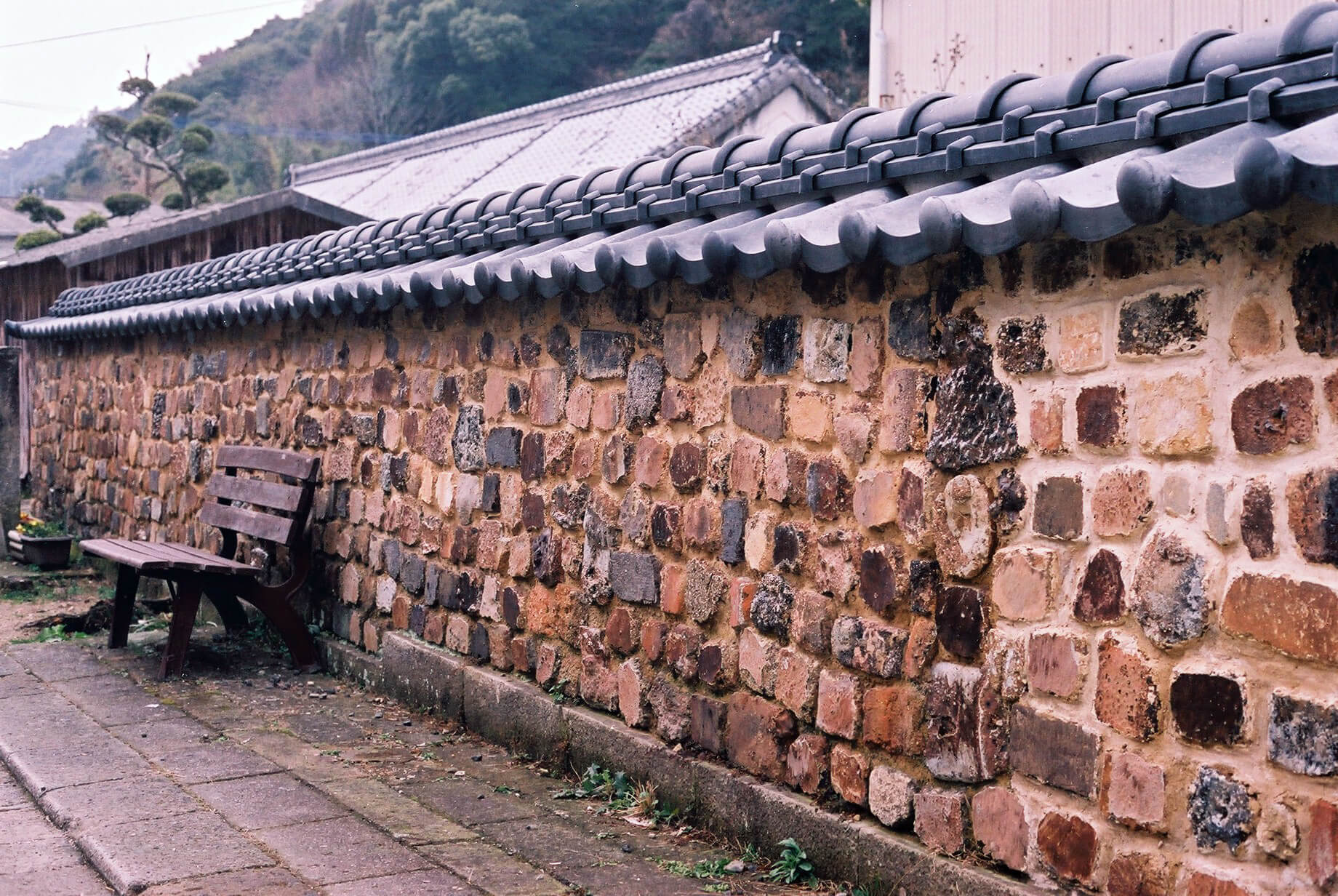 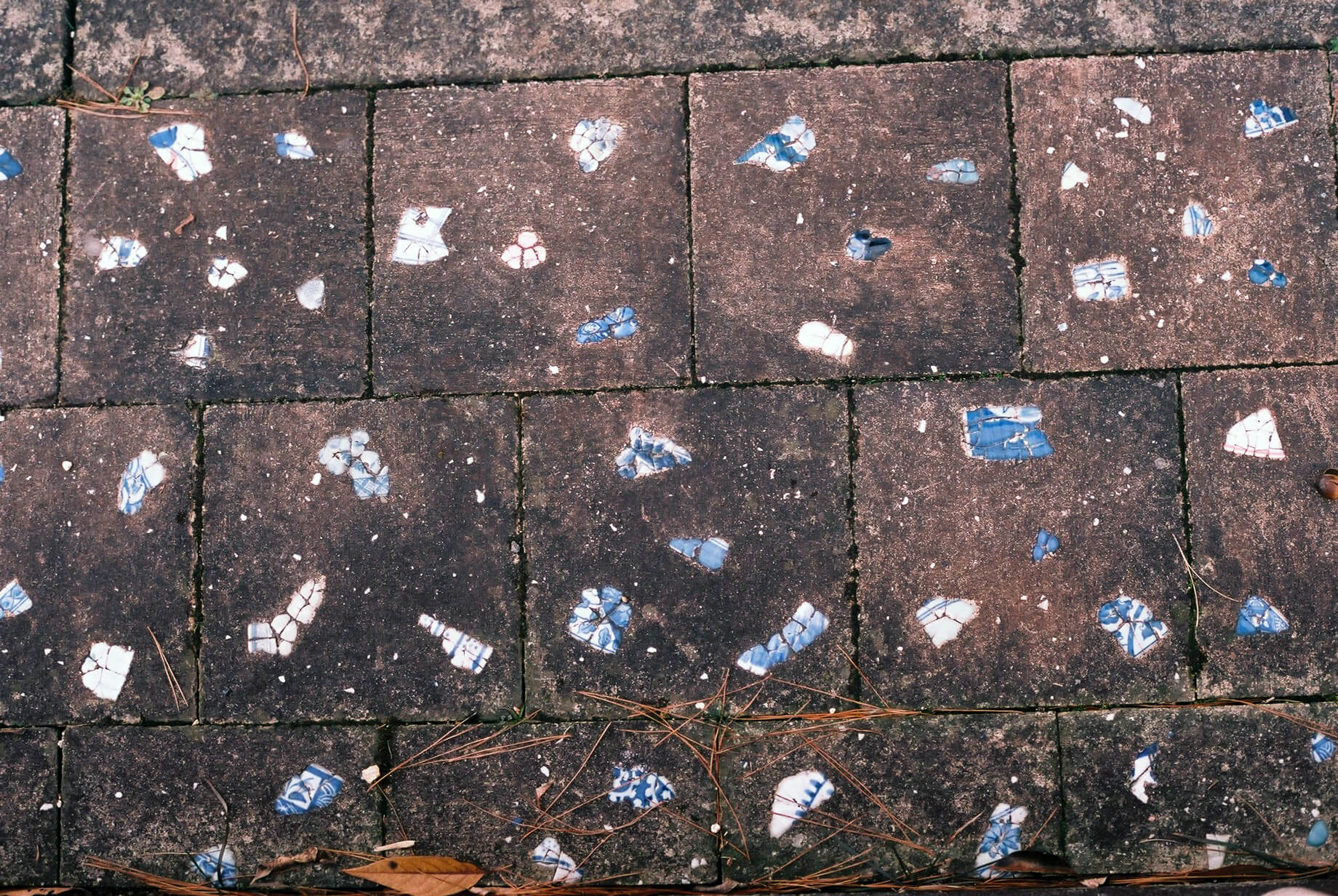 The history of aritayaki, which celebrated its 400th anniversary in 2016 dates back to the Edo period. A Korean potter discovered the stone known as tōseki （pottery stone） which would become the raw material for porcelain on Mount Izumi in the town of Arita, and the porcelain that was fired for the first time in Japan in Arita is said to be the origin of aritayaki. Pottery stone has been mined from Mount Izumi for over 400 years. As evidence of this, most of the mountain has been scraped away, and now while showing off a porcelain white appearance, it has spread out into a large fan shape. Since Mount Izumi pottery stone contains an abundance of iron, it is rather delicate and, when fired, the color easily becomes cloudy or is prone to developing small black spots, but this form of porcelain, which only uses one kind of pottery stone without being mixed with other clay is very rare in the world.

A lot of aritayaki was available in Japan, but in the late 17th century through to the end of the 18th century was shipped abroad mainly to Europe. The skills, designs and formal beauty that have long been cultivated still continue to mesmerize people around the world. This year as aritayaki welcomes its 400th anniversary, modern porcelain by young artists is also being featured.

Bowls which are difficult tobreak even in tough environments

The pottery used to produce the IPPUDO bowls is created through a series of steps from molding, bisque firing, glazing and final firing, and each and every bowl is the result of the professional handiwork of a single pottery maker.

The characteristics of aritayaki are that it is hard and durable. Porcelain made from stone is durable in itself, but the aritayaki commissioned by IPPUDO boasts an even higher strength. The secret to this durability is found in the method of handling the heat and in the method of cooling it down. The firing time for porcelain is normally about 12 to 14 hours. Although there are some cheaper versions which have only been fired for about 4 hours, the time taken to fire the IPPUDO bowls is a whopping total of 16 hours. For two of those hours, the kiln is kept at a maximum temperature of 1,300 degrees which helps to tighten up the baking process. Next the strength is further increased by carefully and slowly cooling these hot bowls.

Although it’s impossible to detect how long a bowl was fired from the appearance of the bowl, this is apparent in its durability. It may be helpful to compare it to a sweet potato. Although a baked sweet potato may have signs of being cooked on the surface, the inside is only half-baked. By slowly and carefully baking the sweet potato on top of some stones, the heat reaches all the way through to the inside, and then a delicious baked sweet potato is ready to eat. Pottery also follows the same principle, and by firing it over a prolonged period, the inside crystallizes and the strength increases, and its hues also clearly come out. 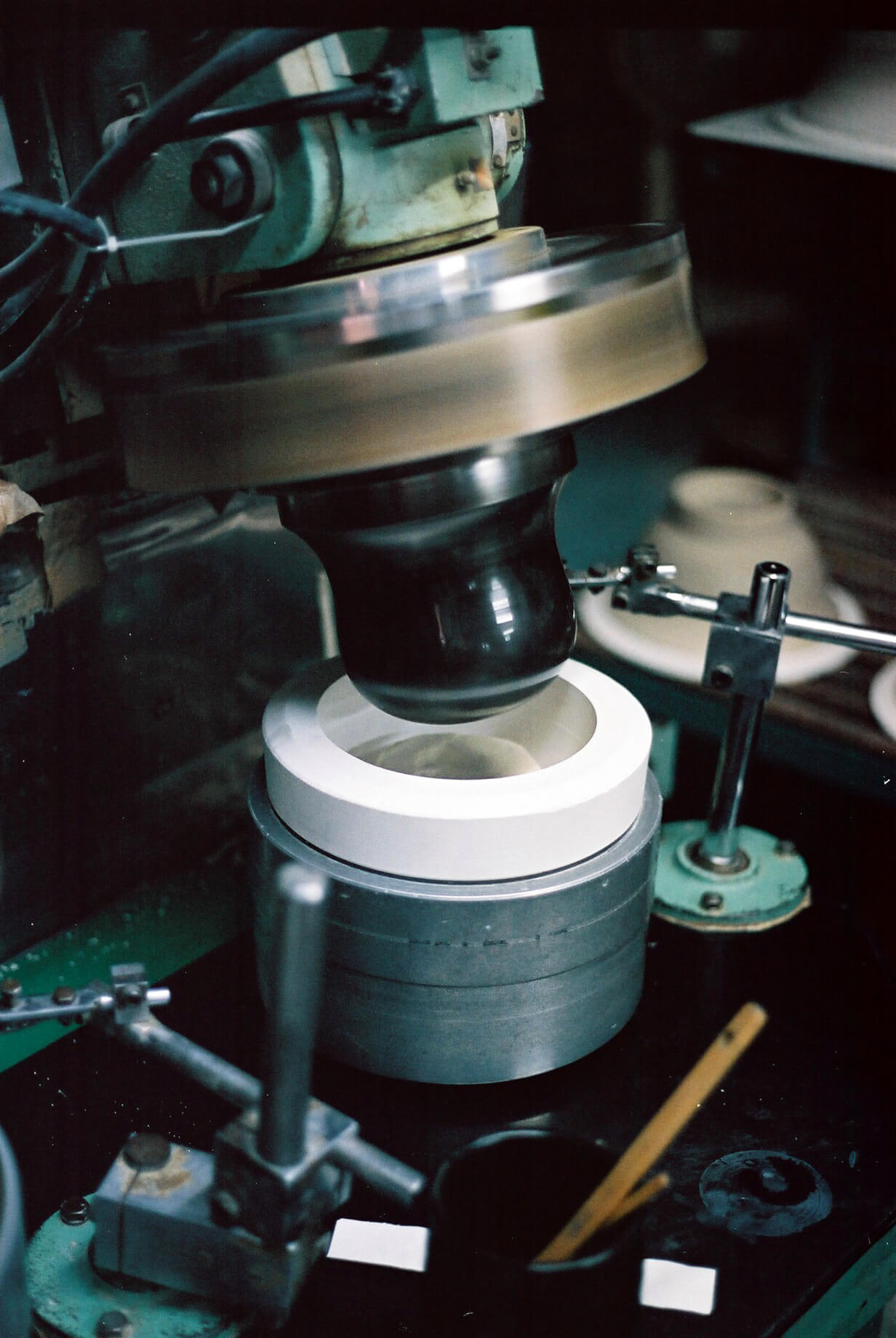 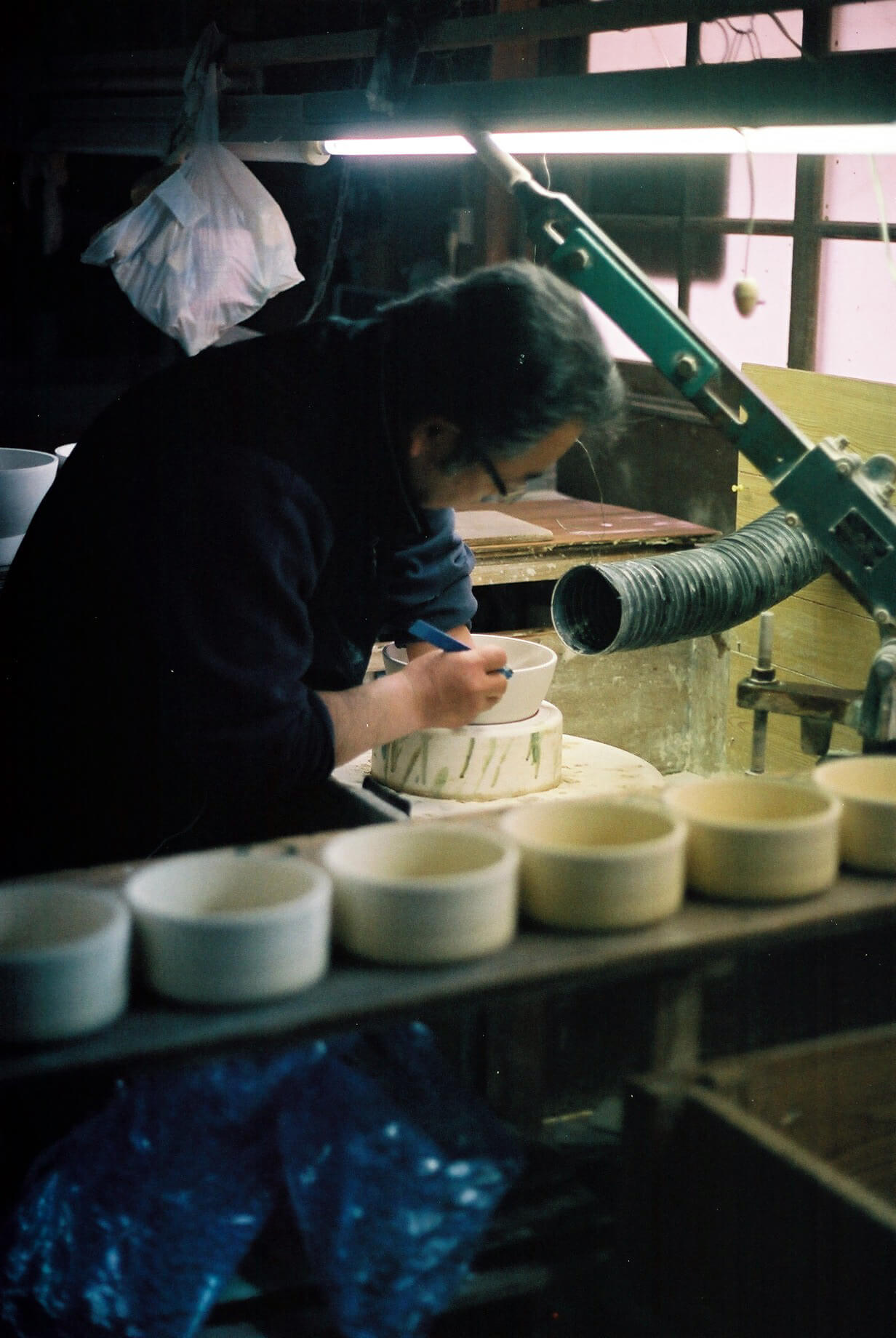 Fine-tuning of the details. Carving 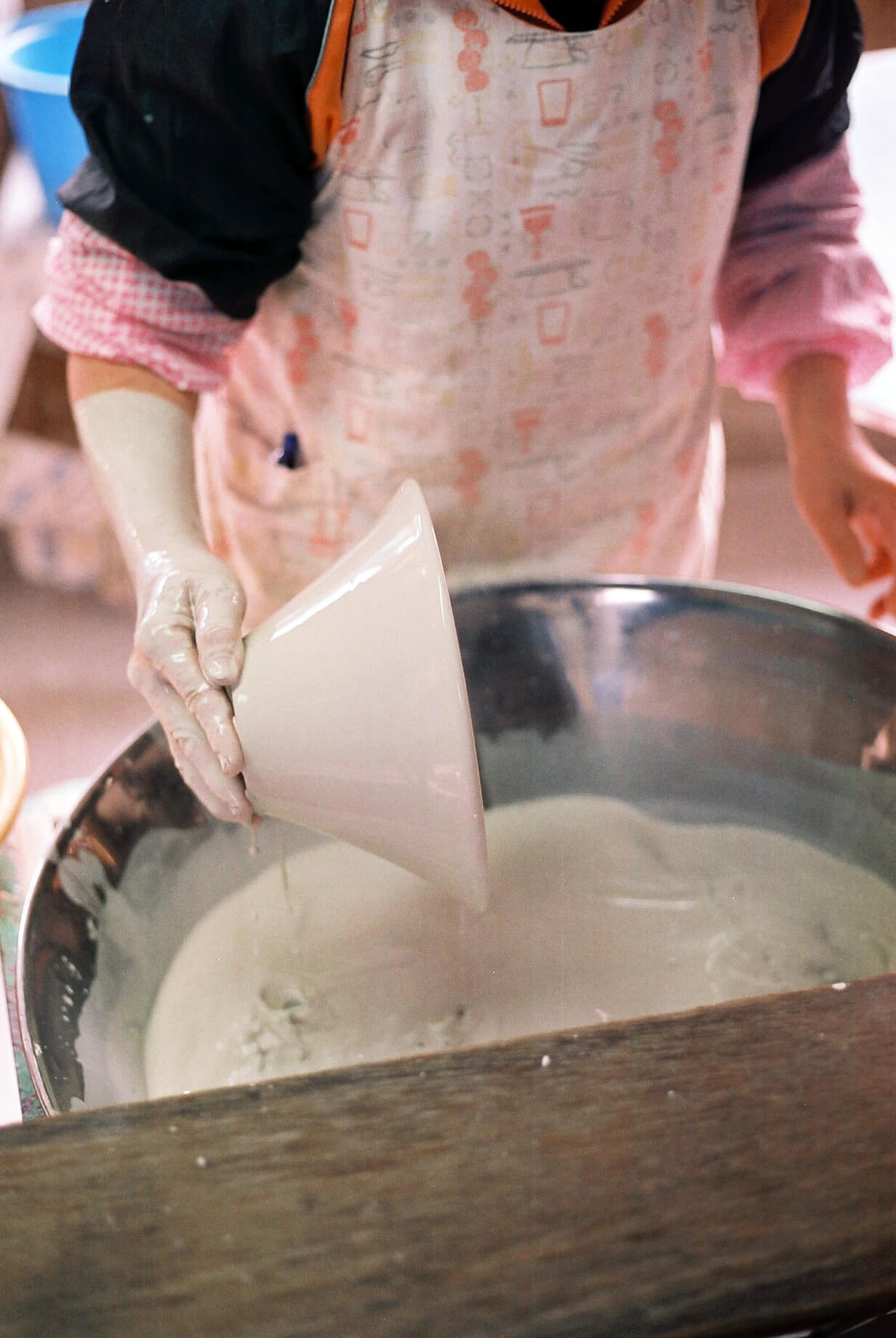 Painting on the glaze 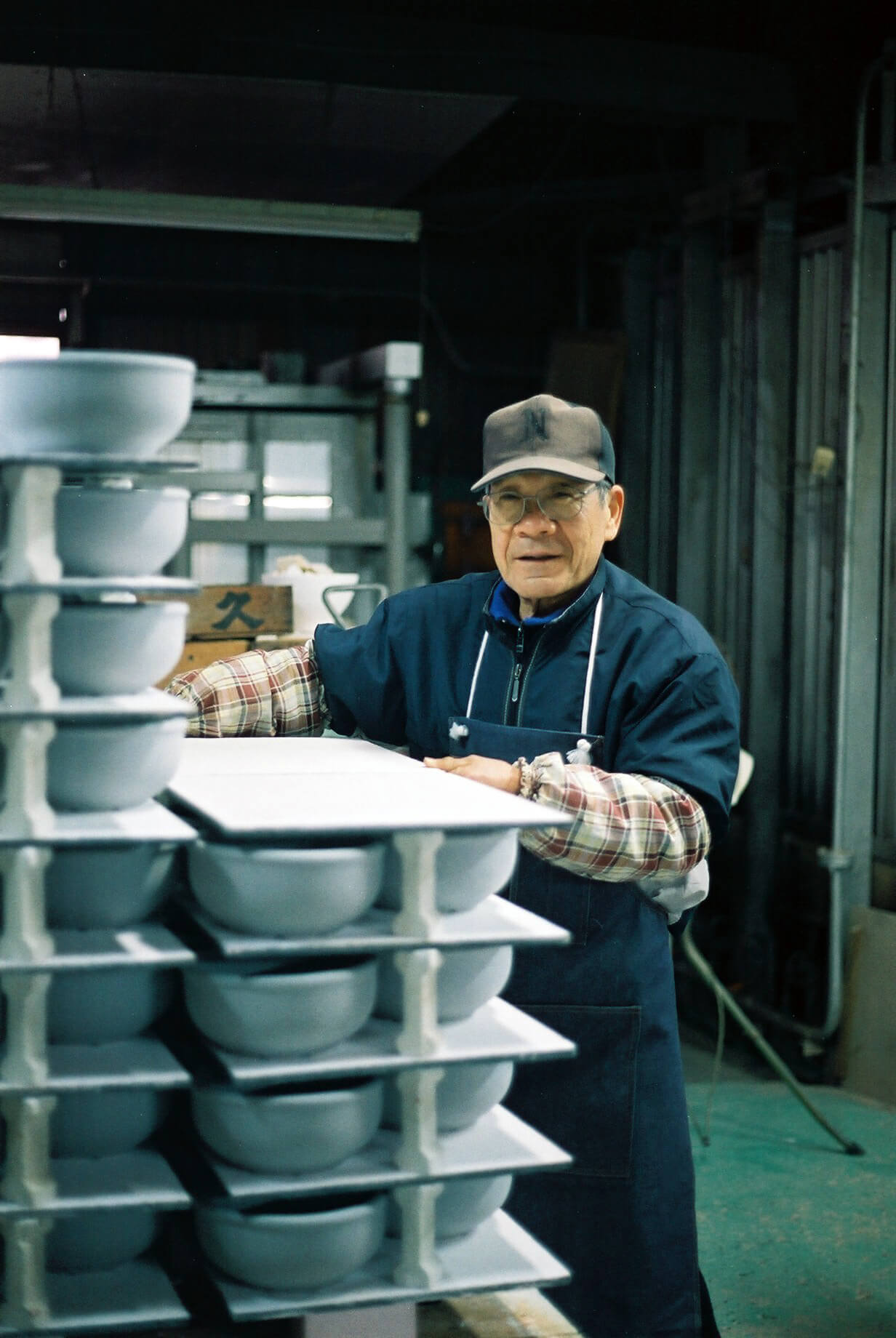 Incidentally, the two hours firing at 1,300 degrees, which is indispensable in firing the IPPUDO bowls expends 30% of the entire gas bill for the pottery, and so even when compared to normal porcelain, the cost of production jumps up. However, this process is not open to compromise for IPPUDO which welcomes more than 10,000 customers every month. The most necessary quality for IPPUDO bowls is durability so as to enable constant use, which is able to endure harsh conditions.

The IPPUDO bowls go through an endless cycle. When an order for ramen comes in, the bowl is heated, laid out, washed after the meal, and then stacked until it is to be used again. The IPPUDO shop environment is tough on the bowls and therefore the cracking or breaking of bowls has to be kept to a bare minimum. Of course, if you drop them they’ll break, but even so, the reason why they are trusted for use in some of the toughest of situations is due to the practiced craftsmanship used in the aritayaki, the fire power used to finish off the porcelain over a period of approximately 16 hours with the highest temperature reaching 1,300 degrees, and the skill required in controlling the cooling time for optimal cooling. The strength of the vessel is said to be proportional to its life expectancy, which is why the current trend in the food and beverage industry is to reconsider the cost being expended on crockery taking into account an overall view.

Normally little attention is paid to the bowls, but I have come to realize that the IPPUDO bowls come with a background of careful craftsmanship. Next time you visit IPPUDO, be sure to enjoy the details of the bowls not only the ramen. By the way, the red and white IPPUDO bowls were once sold at Tokyu Hands for a limited period. Personally I’d like to see them for sale again.

WORDS BY SHOTA KATO
加藤将太 / OVER THE MOUNTAIN

About the editor. Born in 1981. From Fuefuki city in Yamanashi Prefecture （formerly Kasugai-cho of the Higashi Yamanashi district）. Planned, wrote and edited texts in print and online form as well as acting as MC for various events and programs. Helped launch the online magazine CONTRAST in March 2011, and since July 2013, has been based in Shoinjinja shopping district in Setagaya. Created the trade name “OVER THE MOUNTAIN” in October 2014 to represent its business. The idea being that “people will keep on climbing over mountains” both today and tomorrow.