To celebrate the release of the movie “Captain America: Civil War”, IPPUDO produced a ramen inspired by the story and heroes of the movie.As soon as the details of this special event menu named “The Forbidden Ramen Course” supervised by Marvel Entertainment were released, social media and the press were buzzing with the news, and the 200 limited ramen tickets sold out in just a few hours. This event was “hot” news, of course, for the MARVEL fans, but also caused excitement among the ramen fans.

The world of cinema expressed throughingenuity and playfulness

Hello, my name is Kohei Ueno and I am one of the writers for IPPUDO OUTSIDE. Over Golden Week, I traveled as far afield as the United States to go and see a certain rock band’s concert, and one of the things that you start craving while traveling abroad is ramen. Since I spent a few days in New York, I went to the IPPUDO EAST VILLAGE store, which was IPUUDO’s first ramen store abroad, but there was such a long queue that I was forced to give up …. At least I was able to witness for myself the never-waning popularity of ramen.

But as I tearfully left the United States, the food that was able to satisfy my cravings on my return was none other than IPPUDO ramen. I found out that there was a special ramen event being held which had been inspired by the MARVEL movie, and this was great timing since I had just returned from the United States. In order to find out more I sneaked into Minami Aoyama venue.

The event took place on May 13 (Friday) and May 14 (Saturday) over two days. On arriving at the venue, I was greeted by the bright red “MARVEL” logo, and so I ducked under the door curtain and went to sit at the counter in the basement. There, I was amazed to see life-size figures of Iron Man and Captain America lying in wait.

Now you probably want to know more about the true identity of the “Forbidden Ramen Course”. Of course, since the 200 limited ramen tickets had quickly sold out in advance in a matter of hours, expectations ran high. The following were the dishes in the course. 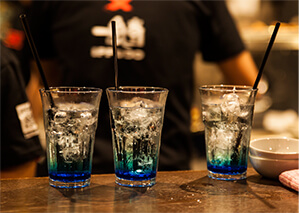 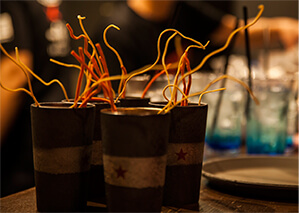 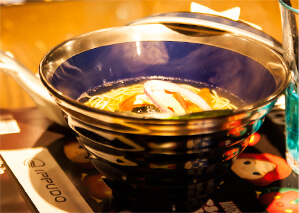 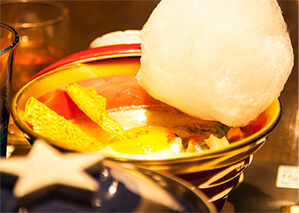 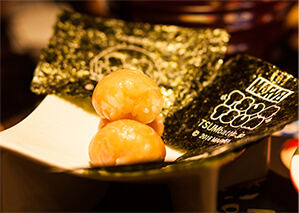 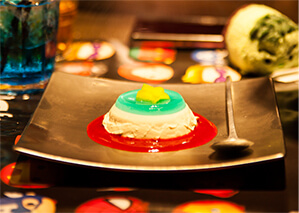 Not only the impact of the names, but the ingredients, color scheme, and presentation superbly created a view of the world of “Captain America: Civil War”. For example, “TEAM CHINTAN”, served in a metallic blue bowl, which was finished off with a powerful and deep defined taste, incorporated “Ant-Noodles” kneaded with black pepper representing “Ant-Man”, while a Japanese mustard spinach leaf was in the shape of Hawkeye’s arrow and Captain America’s muscles were created from bacon espuma.

Meanwhile, “TEAM PAITAN”, served in a bright red bowl reminiscent of Iron Man, used orange carrot noodles conjuring up the image of the Black Widow, Natasha Romanoff’s vibrant hair, while the ingredients of the colorful mixed vegetables represented the rich knowledge of Vision, and the minced cutlets evoked the weightiness of War Machine – all co-stars in the dish, and moreover, the soup was well-received by the female customers being rich yet healthy. Moreover, there was a character hidden in the dish depicted through the playful addition of candy floss representing Spiderman’s web, which made me chuckle out loud.

Come to think, this wasn’t all that surprising. After all, the customers who had gathered for this two-day event were composed of huge fans who had been gathered by IPPUDO from all around Japan. Yanagimoto in charge of product development who had come up with this course laughingly joked, “This isn’t the Avengers but Ramengers”, but this indeed was Japan’s ultimate hero team proudly presented by IPPUDO. The IPPUDO staff went to see the movie numerous times in order to develop the menu, and after repeated trials, I am told that behind the scenes, the IPPUDO staff thoroughly analyzed the world and details of the movie, resulting in their ingenuity and love of ramen being passionately conveyed.

A big-name VIP also surprised the store!Thoughts of the IPPUDO staff as MARVEL lovers

The instigator of this event was Fumihiro Kanegae, the ramen master who is also the General Manager of IPPUDO NY. Being a huge Marvel fan, Kanegae hit it off with C.B. Cebulski, Marvel Entertainment’s Senior Vice President, a regular to IPPUDO NY and Japanophile, who had previously lived in Japan for four years, and together they organized a limited 40 people only event in February at the IPPUDO WESTSIDE store to a sellout crowd.

…… Which is when, C.B. himself suddenly dropped in on the event at the Minami Aoyama store! This surprise caused so much joy to the MARVEL fans and the IPPUDO staff that the store was buzzing with excitement. IPPUDO received such comments in the questionnaire filled in by the customers as, “I really enjoyed this event and could feel the truly great hospitality and the love and passion for ramen”, “I was impressed that not only were the dishes delicious, but each dish on the menu had a meaning and evoked the storyline of the movie itself”, “It was an event showing the love and power of ramen and MARVEL”.

The next stage of this event might well be the London, UK store. The “Panna Cotta of Solidarity” that was served as the dessert hinted at a tea flavor as a secret ingredient, and this was intended as a nod to passing on the baton to London, and was also a nice touch on the part of the staff.

And another point. The Kumamoto earthquake struck in mid-April when IPPUDO was coming up with the concept of this event. The message “UNITED WE STAND” was emblazoned on the double-named MARVEL/IPPUDO T-shirt, and this message was meant as encouragement to the afflicted areas. Five years ago when the Great East Japan Earthquake struck, IPPUDO launched a “Ramen Corps” in which 500 stores nationwide took part, giving support to the afflicted areas by fundraising and opening up food kitchens, and this MARVEL event also gave a glimpse into IPPUDO’s unwavering empathy.

Comment from a MARVEL fanwho participated in the event

At first I thought you had choose one of the ramen, so I was surprised that I got to eat both and there was even a dessert at the end (said with a laugh). All of the dishes were superb, but for me the “First Impact” winter noodles, which was an appetizer representing my favorite character, Bucky, was the “hottest”! You could tell from the fine details of the dishes that the IPPUDO staff truly get the movie, and that they were trying to please the MARVEL fans. (Hiroshi Yamazaki)

I had heard from a friend who had previously participated in “The Avengers” ramen event organized by IPPUDO NY that, “The food was delicious and the event was fantastic.” I couldn’t go to New York, but I was hoping that IPPUDO would have that kind of event in Japan, and so I was ecstatic to be able to participate this time round. I think the best dish was the red ramen topped with candy floss (TEAM PAITAN).

I love Hawkeye played by Jeremy Renner. I found out about this event through Twitter, but the tickets sold out so quickly …. That’s why I was so lucky that I was able to participate when there was a cancellation. My favorite dish was the Captain America ramen (TEAM CHINTAN).

I love Captain America and have ended up addicted to MARVEL. Although I’m a Captain America fan, actually the Iron Man ramen (TEAM PAITAN) was the best. I was so surprised that IPPUDO expressed “Civil War” through their ramen! (pseudonym Mr. Chanpon) Since I’m a fan of Robert Downey Jr., I love Iron Man. At first I was preoccupied with eating the food, but then I enjoyed it even more when I came to the realization, “Wow, this is that hero!” (pseudonym Ms. Rin)