Interview with Hiroshi Inada, editor of RiCE magazine “Why is Food Culture Becoming
So Important These Days?”

The Ippudo OUTSIDE staff regularly reads a variety of media, one of which is the RiCE food culture magazine. It doesn’t cover very many popular restaurants, and offers no rankings. Instead, every issue is packed with articles related to food, and by the time you’ve read the whole thing your head is full of restaurants you want to visit, and dishes you want to try. Last December they published their long-awaited ramen-themed issue, and the OUTSIDE staff devoured it. In addition to merely reading it, they also decided to interview Hiroshi Inada, the editor, to take a closer look at what part food culture plays in today’s lifestyle.

Thank you for meeting with us today. Could you explain how you decided to publish RiCE?

Inada：Our first issue was October 2016. Before that, I worked as the editor of a culture magazine named EYESCREAM for 12 years, and I left that job pretty satisfied with what I’d accomplished. Over the next three years or so I began to notice how much the culture scene was affected by food and drink. In fashion, for example, every time a new “lifestyle” shop opened, there would always be something related to eating or drinking on the first floor: specialty coffee or organic food, for example. They were magnets, drawing people to the store to introduce the new lifestyle or clothing line. The same thing was happening at other events, like music festivals—without a stand offering delicious food, visitors weren’t satisfied. Food was developing into a new genre in film as well, with even a “Food Movie Festival” showing up. Food was becoming more interesting than ever, maybe as a worldwide phenomenon. It really seemed appropriate to design a new magazine around food, and I thought it would be perfect for today’s readers and culture. 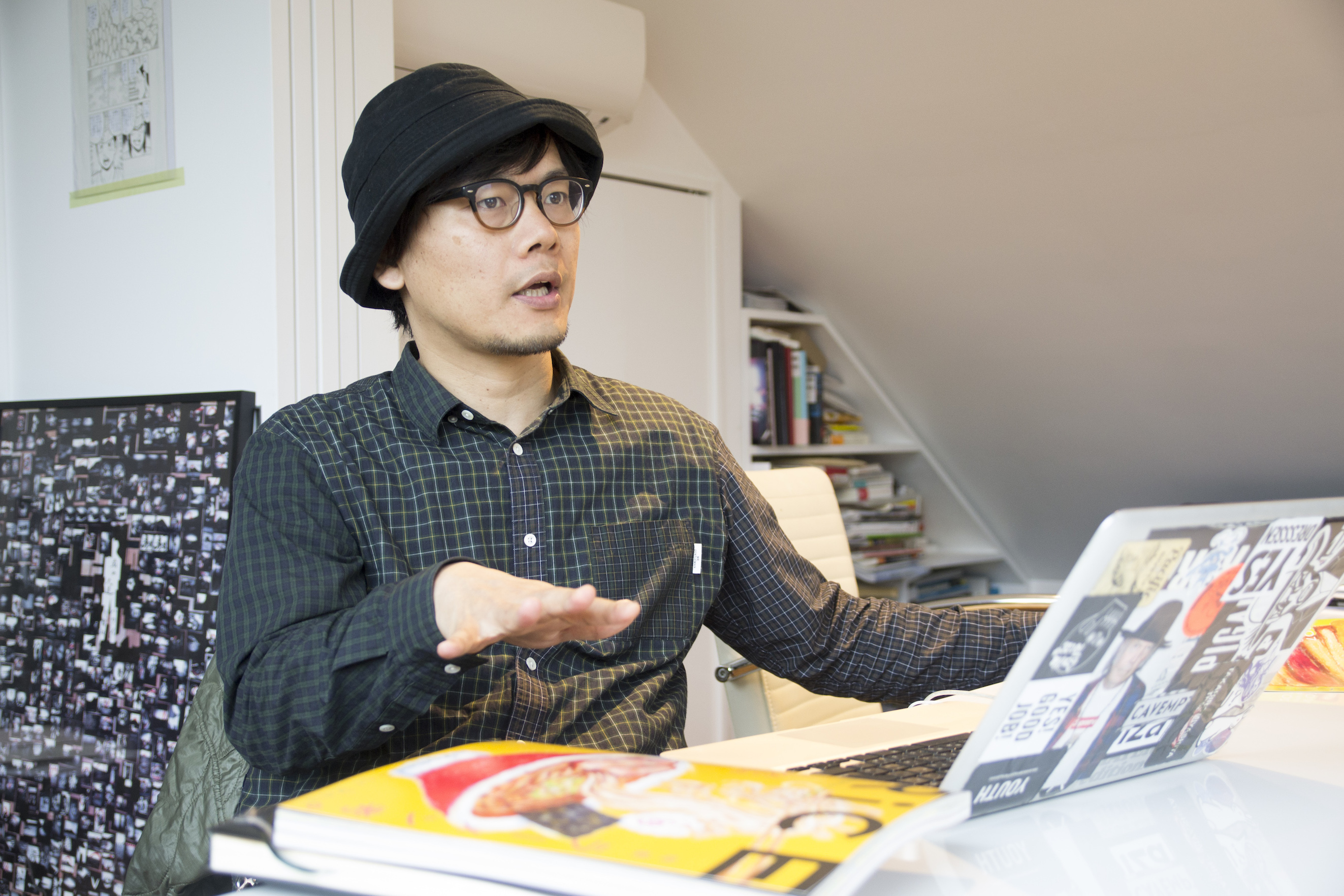 Hiroshi Inada Worked as an editor at Rockin’ On, handling magazines including ROCKIN’ ON JAPAN, bridge, H, CUT, and rockin’on. He launched the culture magazine EYESCREAM in 2004, finally leaving it as editor after the 12th anniversary issue in April 2016 to found RiCE Press. The first issue of RiCE, a food culture and lifestyle magazine, was published that October.

The magazine is named RiCE, too… you brought food to the forefront in the title.

Inada：Rice is a big part of our national identity, I think. I thought that was important, and I wanted to introduce the world to the best parts of Japan. I adjusted the shape of the “R” in the title logo to resemble rice, and the theme of the first issue was rice, too.

The first issue (right) and the sixth issue, the ramen special. All the covers use original art by Masakatsu Shimoda.

You have a symbolic theme for every issue: rice, fish, curry, sweets, Japanese sake. How do you pick them?

Inada： I try to look at the total food picture when setting issue themes. We began with rice, of course, and next was fish. There are a number of problems with fish, such as that fact that catch tonnage is steadily dropping, and I thought we needed themes that could cover a lot of perspectives. The third issue was curry, and that hit the bullseye perfectly. Curry and ramen are the two major national foods that we really had to cover. Next came sweets… people who really love sweets almost need them to live, and I wanted to boost the voltage and dig into the issue. It was the ideal theme for the magazine. Around the fifth issue it was time to start thinking about drinks and alcohol, and since Japanese sake is made from rice that was the obvious place to begin. It’s the most popular alcoholic drink in Japan today, too. I think the rule is that we need to have three good reasons to select something as an issue theme. too.

Japanese sake is really popular these days, isn’t it? Ippudo also began offering sake and ramen together at the Ippudo Stand. The sixth issue was finally about ramen. There are copies in the OUTSIDE editorial office, and we have talked about it quite a bit.

Inada：That’s wonderful, thank you! We worried a lot about how to express ramen well in the magazine—well, we worry about that problem with every issue, though, too. We researched a number of ramen specialty magazines for ideas. Some publications already list new ramen restaurants, or provide ratings, but we wanted something completely new. We discovered a movie called Ramen Heads, quite by accident but with perfect timing, and found a way to work with them. In the movie, the owners of three ramen restaurants—Tomita, Iida Shoten, and Tsuta—are connected, almost like the “stars” of the ramen world. It made for a really outstanding issue. Takashi Tanaka of Sunny Day Service was a major factor, I think.
When we put an issue together, we work closely with somebody who really knows all the ins and outs. Tanaka eats about 600 bowls of ramen a year when he’s on tour with his band. He’s known for sniffing out delicious ramen restaurants that aren’t listed in any guide book, little places that only the locals know about. The 100 varieties he came up with are truly unique.

One page from the ramen special. No wonder readers get hungry for ramen!

It turned out very well… we use it as a guide now, visiting brand new ramen restaurants. Have you had any new insights into Japanese food culture as a result of making the magazine?

Inada：I think the term “food culture” itself is pretty new. The meaning has changed over time, and these days it seems to include the idea of trend setters and opinion leaders; not only individuals, but networks of influential people. The situation’s the same for the French New Wave in film, and punk music. They aren’t created by individuals, but by networks of people moving toward a common goal. I think the same sort of thing is happening in food on the global scale. When you think of ramen overseas, for example, Ippudo has an outlet in New York City, more ramen restaurants are popping up, and customers are waiting in line to get in, demonstrating how new the concept is. This is really exporting Japanese food culture, and our magazine takes that phenomenon and expands on it.

Why do you think food culture has become such a hot topic lately?

Inada：Generational change is part of it. The active generation today is around thirty these days, and people older than that don’t have much of an active presence in media. People actually working in the industry seem to mostly think that if they make something delicious, customers will come even if they don’t promote it. These days, though, everybody expects delicious food with delivery, and the key point is discovery. The generation around thirty years old understands this.
Technology has continued to evolved after SNS, and younger people attuned to these changes are beginning to take an interest in food and drink. Fan groups are developing throughout the industry, whether for coffee or ramen or sake… I think food and drink have become another category of personal choice, something to build individuality on. The “in” crowd all wanted to be fashion designers a few years ago, and now they’re trending toward food. They are all eager to tell others about new, good discoveries, and they continue to have a strong, healthy effect on the industry.

I think you’re right. we offered ramen at a UNIQLO in Paris recently, as part of an Ippudo commemorative event. I thought the event was indicative of how the boundaries between food and fashion cultures are beginning to dissolve. Your magazine is covering new developments like that.

Inada：Exactly. Japan has a food culture it can be justly proud of, and since eating is a key part of life itself, I think food is actually a crucial element in defining lifestyle. It doesn’t mean going out and eating something exotic and gorgeous, but just something that makes you happy, one moment of joy in your life. It improves your quality of life, and the feeling is universal. I also think it’s important to share this recognition, which is part of the reason the magazine is bilingual.
I hope as many people as possible get a chance to read it!

We always look forward to it!

The theme for the next issue was sandwiches！

The latest issue of RiCE, published in May, was on sandwiches. The online edition, RiCE.PRESS, is packed with food-related information every day. Drop by and have a look!

After working at a publishing company and in editing and production, joined Chikara-no-Moto Holdings in 2011, involved in Ippudo and other house brand promotion planning and advertising direction. Also handles SNS operations and editing of the IPPUDO OUTSIDE web magazine for Ippudo.